The word Ecumenism is an ancient word that comes from the Greek oikoumene, which means, literally, “the whole inhabited world.”  It’s first use in a Christian context referred to church councils, which were at first meant to bring early Christians into doctrinal unity – a lack of which prompted the emperor Constantine to call the first in Nicaea in 325.

While the word in this context has always meant to convey the idea of Christian unity, it’s modern working out really began just over a 100 years ago, spurred on after centuries of division and a world that was growing smaller through easier means of travel and continents that didn’t share Europe’s history of division. I’ll present a brief overview of this history then share one way forward.

The modern movement started with Protestants efforts, through the World Missionary Conference at Edinburgh in 1910 and began really accelerating after WWII through the World Council of Churches (WCC) in 1948. The pre-war dialogues were mainly between various Protestant denominations, 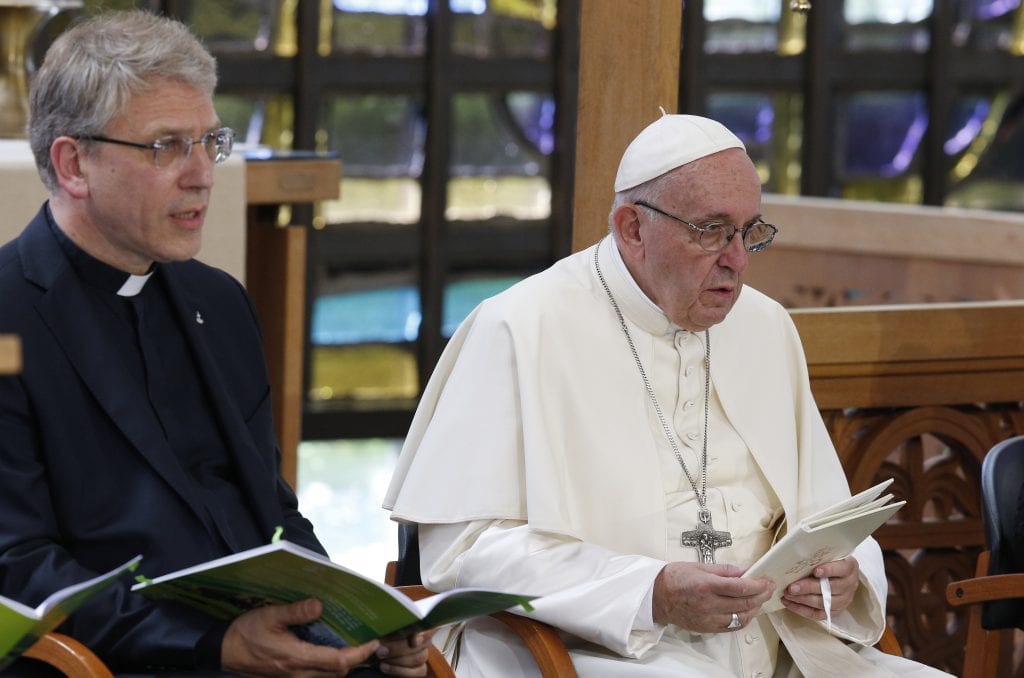 with a small contingent from the Orthodox churches, with the Catholic Church unwilling to participate.  But after the war, there was an ever-growing dialogue with Protestants and with both the Eastern Orthodox and Roman Catholics Church. While the Catholic Church is still not officially part of the WCC, the two have had significant interactions with there being a permanent Catholic representation on the WCC Faith and Order Commission.

The next step significant step in Ecumenism was with Pope John XXII convening the Second Ecumenical Vatican Council in 1962 (62-65).  While this was of course a Catholic Council, many Orthodox and Protestant were invited as witnesses to formally and informally consult on conciliar drafts.  Not an insignificant inclusion.

From this council, the Catholic church set forth a number of decrees, declarations and constitutions. Of the decrees, two were particularly relevant to ecumenism. The Declaration on Religious Freedom (Dignitatis Humanae) was a statement about the nature of conscience in religious belief:

“In all his activity a man is bound to follow his conscience, in order that he may come to God … It follows that he is not to be forced to act in a manner contrary to his conscience. Nor, on the other hand, is he to be restrained from acting in accordance with his conscience, especially in matters of religion.”

In the Decree on Ecumenism, a restoration of unity and the reunion of Christendom were the dominant themes.  Together these two documents helped set the stage for talks that would begin to address the original break that caused the Reformation.

These decades long dialogues between Catholics and Lutherans starting in 1964 and culminating in the issuing of the Joint Declaration on the Doctrine of Justification in 1999 was probably the most significant ecumenical activity. While the document goes far in attempting to find doctrinal agreement on the issue of justification, some feel it tries go a bit far in finding agreement where there is still some difference. Either way, it was a significant step in the progress towards unity.

One last significant effort to be mentioned before talking about where to go from here is an effort here in the U.S., as a group of academic and pastoral leaders formed in the 70’s to discuss ways they could learn and grow with each other.  These meetings culminated in a published signed document titled Evangelicals and Catholics Together in 1994. This statement delivered a:

“testimony that spells out the need for Protestants and Catholics to deliver a common witness to the modern world at the eve of the third millennium. It draws heavily from the theology of the New Testament and the Trinitarian doctrine of the Nicene creed. It seeks to encourage what is known as spiritual ecumenism and day-to-day ecumenism.”*

These dialogues continue to this day, with the most recent publication of “Justified in Jesus Christ” in 2017, with an intended 4-year cycle for new publications.

While this “common witness” is desperately needed in our time, the question is what else can be done to further this search for Unity?

As someone who has spent decades in both the Protestant and Catholic churches, I have seen the blight of disunity on the Christian witness in the world. I do believe God works despite our lack of unity; I have seen it. But it is clear the harmful effect of infighting that blackens our ability to witness to a world desperately in need of love, compassion and community.

One way forward may be through a “sharing of gifts,” a term used by Pope John Paul II (and further elucidated in an excellent essay by Cardinal Avery Dulles) as a way of bridging the divide that separates Christians. This means a sharing between denominations and religious groups of those things which stand out as strengths that make each denomination special, even great! For African American churches, their belief and incredible praise. For evangelicals, the commitment to the Bible and ability to reach our modern, secular world in evangelization. For traditional Protestant denominations, their focus on social justice and attempt to integrate all Christians. For Catholics, their rigorous theology, embrace of mystery and focus on the presence of God. For the Orthodox church, also the embrace of mystery and powerful tradition of liturgy. For Anglicans (Episcopalians in the U.S.), their via media – a way between the Catholic and Protestant worlds. And of course, for Charismatics and Pentecostals, their gift of the active presence and power of the holy spirit.

If we can learn to not only value the strengths of our own faith communities but also the different gifts of other groups, it would go a long way in helping us to see how we are all the body of Christ, and we are all needed to bring His kingdom to a world in need of hope, peace and love.

A general summary of the Ecumenical movement

Article on the original group of Evangelicals and Catholics Together

Catholic Summary of the Ecumenical efforts in the past 100 years

Decree on Unity from Vatican II

Lutheran and Catholic commemoration upon the 500th anniversary of the Reformation